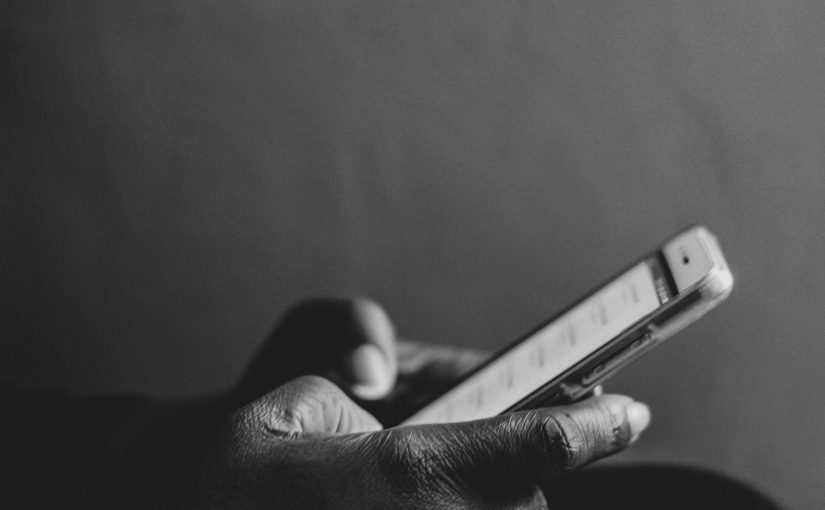 Successful mobile marketing strategies don’t have to be same old, same old. And they don’t have to add up to: crunch more numbers. If you’ve considered the obvious, but you don’t have the need or budget for gigantic big-data trawls like Amazon, you probably need a more creative way to understand and implement the tools you already have, as well as a couple of additions that can give you an edge without breaking the bank.

First: What exactly are we talking about when we say ‘mobile strategy,’ anyway?

What do we mean by mobile strategy? That depends who you ask. A lot of the time, folks will tell you the latest trick they read about, like that’s a strategy. But a strategy is a repeatable process for getting from where you are to where you want to be. It’s not a method, a technique or a trick. Those things will produce upticks that promptly fall away again. Strategy generates long-term, solid growth.

So what should you bear in mind when formulating mobile strategy?

Personas that map to desktop behaviors might not map to mobile behaviors. That’s going to be a problem, because then you’re seeing only half of someone’s digital life. There’s no reason to believe that people shop on mobile, buy on desktop anymore — customer journeys are a lot more peripatetic and generally ambivalent than that.

So you need to build personas from real customer journeys. If you don’t have that data or a way to begin collecting it, use best practices instead and augment them with the data you do have. For example, you might have little customer data beyond Google Analytics, but that will tell you where customers are located, what time they access your resources, and the channel you acquired them, right out of the box. Use whatever data you have to build personas that aren’t mobile-specific — that will give you two different views of the same users, both likely false. Instead seek to build personas that recognize both desktop and mobile as behaviors, rather than definitions, of your users.

Mobile metrics are as susceptible to misreading and vanity as desktop ones. When we make the transition from desktop to mobile fous we have to take our education with us: it’s not about clicks and views. A good rule of thumb is: if it doesn’t measure something you can spend, it must measure something you can do. Measure your Pirate Metrics — acquisition, Activation, Retention, Referral, and Revenue, or AARRR! for short, just as you would on desktop. Each of these either makes higher revenue more likely or directly measures income.

Which you should choose is argument for another time and an infinite number of developers, designers and SEOs. There’s a time and a place for that, and it’s called Twitter. But if you don’t put mobile at the forefront when you design your core assets it will come back to bite you. 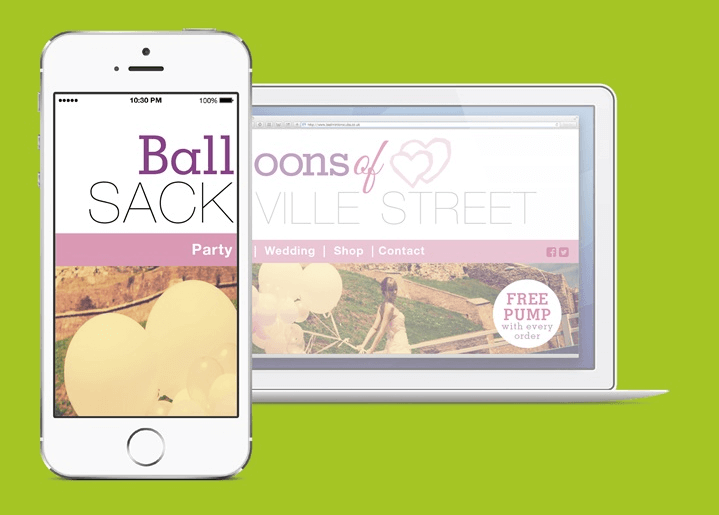 What’s more likely is that visitors just won’t be able to see anything.

Make sure you’re not ignoring newer digital ad opportunities, products and spaces. Mobile moves fast and there are always new opportunities, often with lower costs than the established players. This includes in-app ads,

Specific, vertical videos for each campaign and ad product 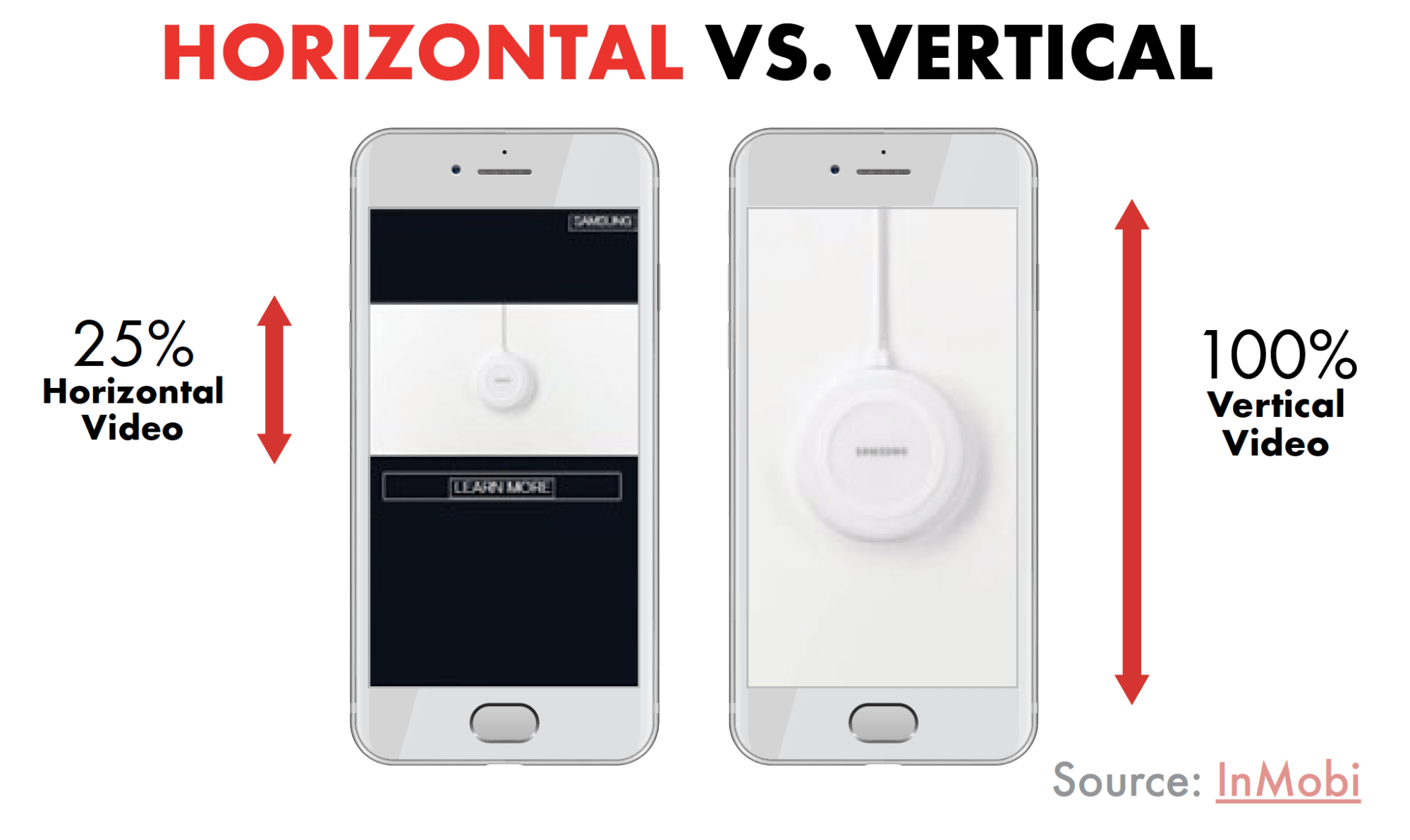 People will see your stuff on more than one platform. Don’t show them the same old, same old, as they go from one platform to another. This is a place where really good design and planning can pay off, and it can’t be driven by quantitative data alone. Qualitative feedback is desperately important, and it needs to go beyond the questionnaire. One option is to haunt the forums and channels where your customers hang out — Facebook, or Reddit, or Telegram, or wherever it might be — and look for what they tell each other about your industry and how it communicates with them. Tie that to the quantitative data you’re collecting and you can make much more informed decisions.

And don’t show horizontal images and videos to people who will overwhelmingly view them in vertical format. Mobile phone users hold their phones upright 94% of the time, meaning that content aimed at them should be created and displayed the way they want to consume it. Content, not just asset design and marketing strategy, needs to be mobile-oriented.

Local targeting is pretty ancient news by now. The dubious medical procedures and unlikely-looking potential romantic partners that show up at the bottom of websites usually make a nod to it by telling you all the hot singles are in [your town], and most multinational businesses serve you the right website for your timezone, language and currency. In other words, they’ve figured out that if you’re in Spain, their message will just hit different if they make sure it’s not in German.

Hyperlocal targeting means zooming in on your audience’s location to the point where it affects their search intent, basically. So rather than just serving them the website for your multinational business in English because their IP is in the USA, you serve them the website for their nearest franchise. That’s a big change in effort, but it’s a big change in reward too.

For desktop search, it can bring some improvements. But for mobile search it’s a gamechanger. Mobile search is often for nearby businesses where customers plan to go, soon, and spend money. Consumers search more than ever before, but they input location information less: 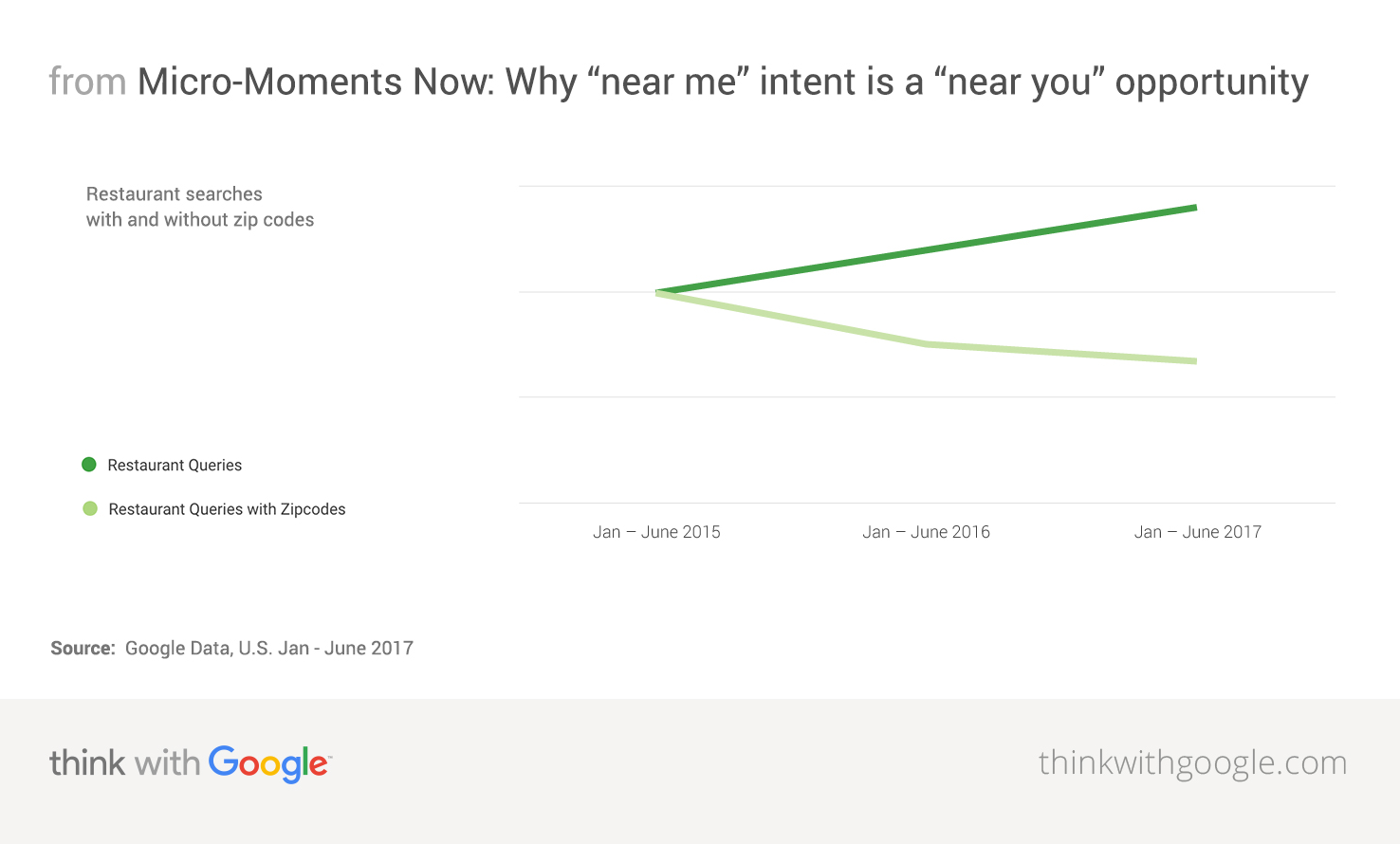 This also has SEO advantages, such as giving you access to the ‘local pack’ — and within that pack, signals from Google my Business account for 25% of rank, while reviews account for 15%. Hyperlocal targeting delivers significant advantages on mobile and can be done with the tools you’re currently using, including with Google Ads: 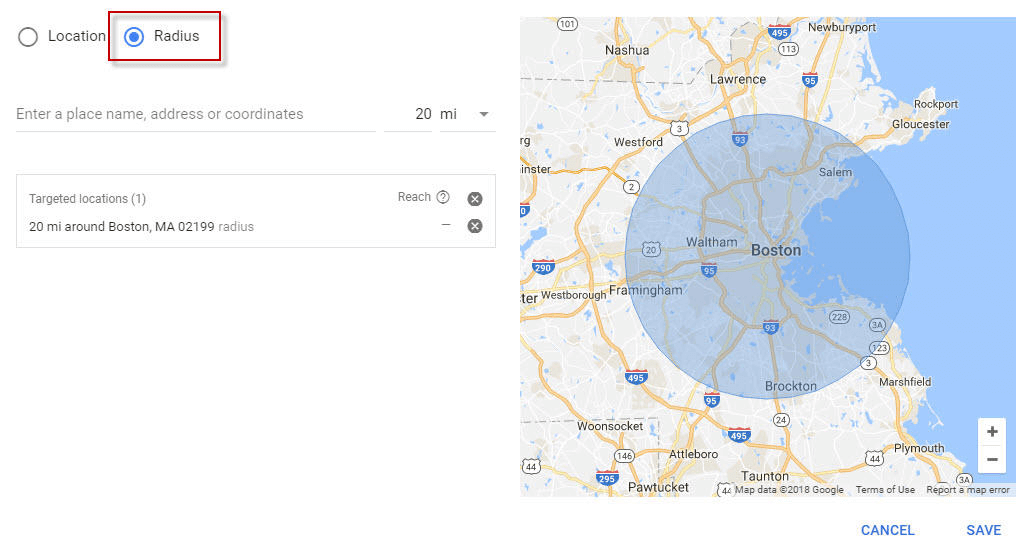 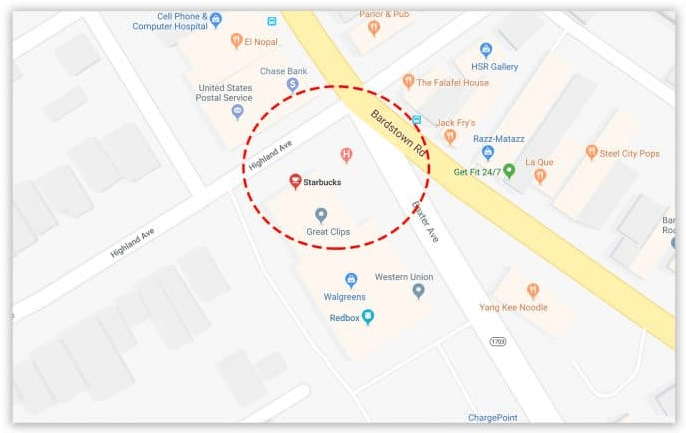 Over at the other end of the scale is the huge difference you can make to your results if you find out, and target, where your audience is right now — like, literally exactly where they’re standing, right this second.

One way to do this is via geofencing: fencing off physical areas with bluetooth beacons that alert your business systems when customers enter the area. The ‘white hat’ version of this would be to geofence locations where your business has stores; I guess the time Burger King geofenced McDonalds locations would be the ‘black hat’ version, probably best avoided unless you have Burger King-level lawyer money. 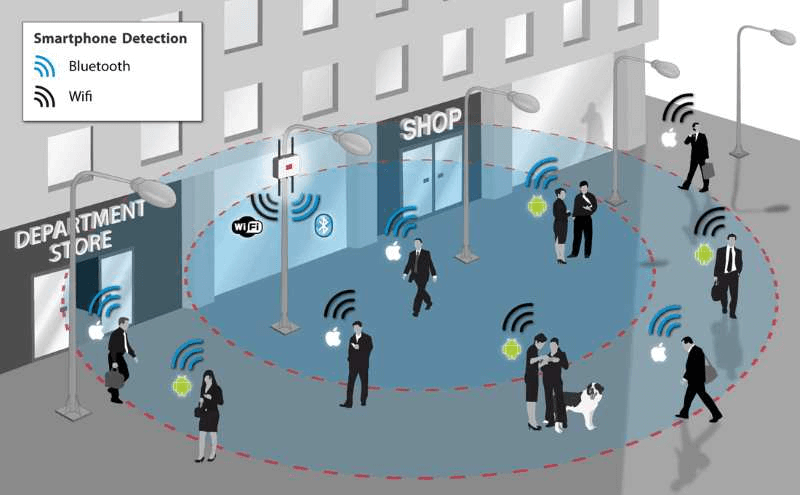 If your business model supports it, you can take this one step further and actually include beacons in specific locations within the store, targeting offers and content to consumers’ locations; it’s a pretty fair bet that people standing right next to the jeans are thinking of buying jeans, right? This is known as ‘proximity marketing.’

Short-range low-energy bluetooth beacons are an ideal tool to locate consumers to within a few feet. You need buy-in for this, partly because it’s wildly unethical to track people’s movements without their knowledge and consent and partly because you can’t just message people out of the blue; proximity marketing relies on mobile apps, meaning it’s a better choice for larger, more established businesses that already have an app user base.

These techniques can be powerful when applied through your own mobile app; if you don’t have one or it has low usage or uptake, consider doing what Lord and Taylor did. Lord and Taylor is the company that owns Lord & Taylor, Hudson’s Bay and Saks Fifth Avenue. In selected stores in the USA and Canada, they rolled out proximity marketing that relied on their own beacon network, content and backend, but which used third-party mobile apps to communicate with customers. Apps selected included popular coupon app SnipSnap, but your own app selection could differ, and we should be watching out for the development of an ecosytem of reciprocal content promotion across third-party mobile apps, including in their advertising. 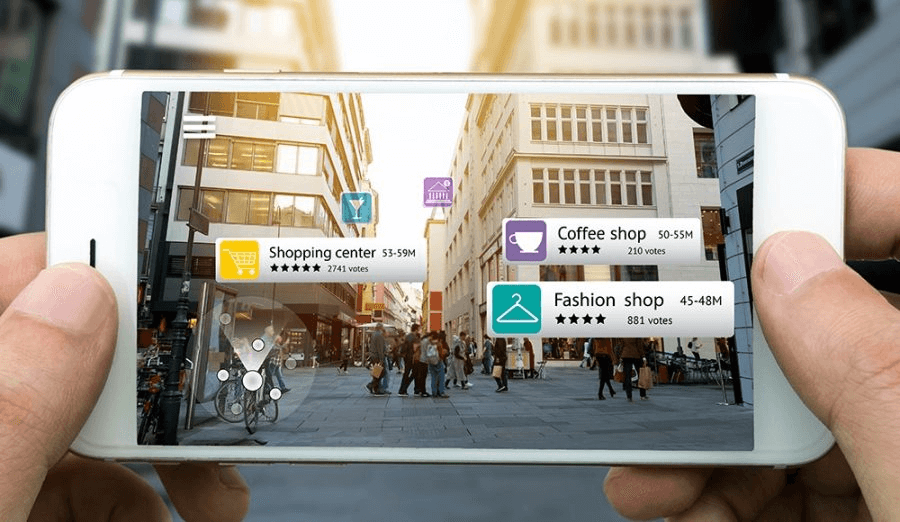 Augmented reality is one of those technologies like AI that has a ‘jetpack’ feel about it. It’s always about two years away from changing everything, just as soon as we can get the thing to work. Just like AI, though, AR has actually moved into real life and started doing things. And just like AI, it’s the less-showy, unspectacular applications that do reliably work on the current tech base that are making changes, headlines and money.

Everyone remembers Pokémon Go, but marketing AR can be simpler and remain effective.

Also known as ‘image recognition AR,’ marker-based AR lets you use images like QR codes to trigger AR experiences. These experiences can include turning a static image in reality into a moving image on a device, to show product performance or to demonstrate clothing as it appears on models, for instance.

AR success stories abound: IKEA’s Place app lets users try out how their own home would look with a given piece of IKEA furniture in it, for instance. 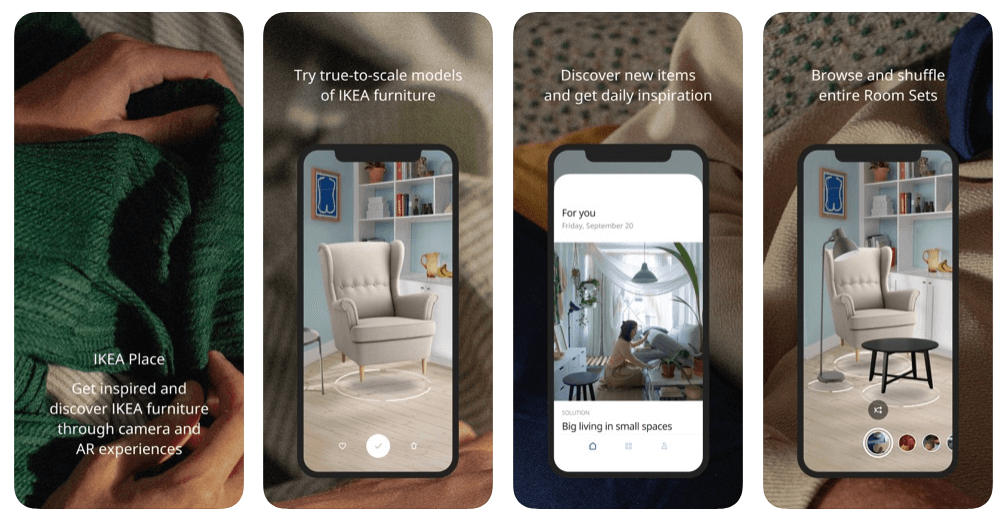 There’s more to life than Google

Search ads means Google Ads. SEO means Google optimization. But it really shouldn’t. We can easily get lost in percentages and forget about the raw numbers. 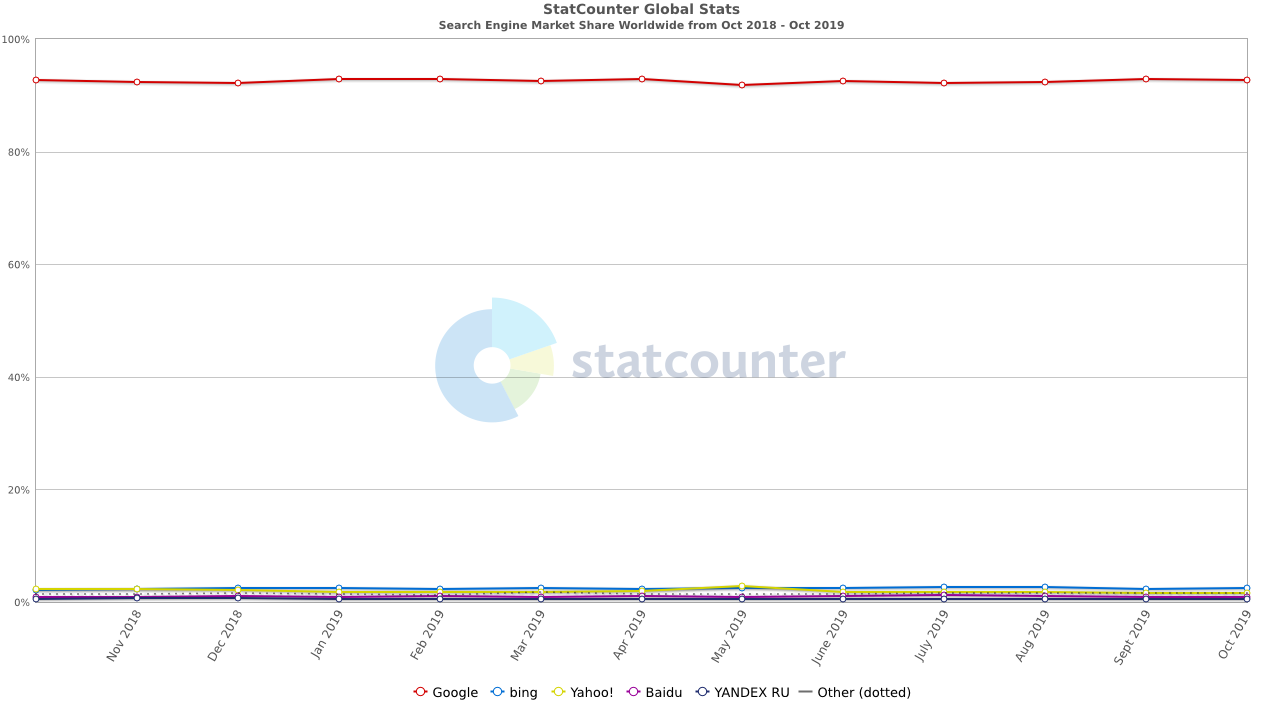 But, 1.61% of all the people on the internet is a lot of people. And search engine use is strongly dependent on other factors: 33% of US searches are carried out on Bing, for instance.

And think of newcomers to the search space. What happens when you optimize for DuckDuckGo? Nobody really knows. Which means that’s a whole emerging market that’s in the same place Google search optimization was at twenty years ago. Obviously, don’t throw a ton of money at it til you know it works — but are you sure you don’t want to at least try?

Quantitative data has obvious value: numbers don’t lie (though they regularly mislead). But is there any use for qualitative data? Where should you get it, and why should you care?

Quantitative data might show you that ads on platform X get huge numbers of views. That sounds cool. Let’s pour money into that. Quantitative data would be something like finding that everyone who uses that platform hates your ads. They’re being viewed because people are making mocking montages of them. Suddenly, not so cool.

You’ve got to have both types of data to form a picture of what’s really going on. Getting qualitative data doesn’t mean ‘going with your gut,’ or doing some Mad Men liquor-and-guessing marketing. It means asking, and sometimes eavesdropping, to find out what your customers and prospects actually think.

Sometimes the best thing to do is to just do something obvious really well. When we think of creativity, we often tend to think in terms of creating something totally new. No-one says, I just created this wheel, right?

But some brands have made huge successes of their mobile marketing by hundreds and thousands of tiny acts of creativity, employed in the service of making something as simple and old-fashioned as a blog post so well that it actually works.

Ahrefs is the poster child for this approach. Their simple-but-effective digital marketing recommendations boil down largely to ‘find out what people want to know, then tell them,’ and they carry that recommendation over to mobile too: 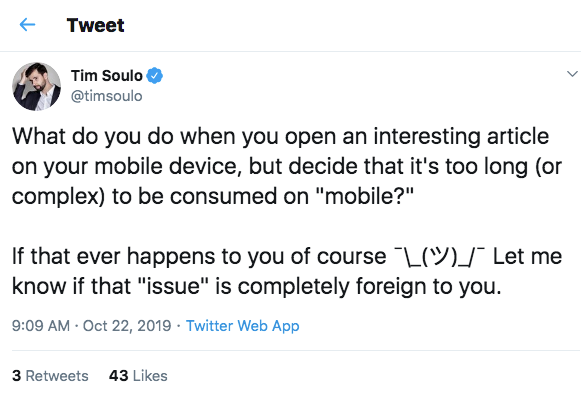 We’ve gotten so used to seeing the ‘100 million tips to try right now’ approach replicated in marketing that we’re not used to seeing creative and strategic together at all. Can you do both? You better. It’s the best chance you have to outstrip the big players, with their investments in machine learning and their huge quantities of user data. What they struggle to do is envision and act on original, creative strategies, yet these don’t cost huge sums and often don’t require new skills. Look to some of the approaches outlined above to reach prospects and consumers on mobile in ways competitors can’t or won’t.