I had the pleasure of working with Tadeusz (Tad for short) at Crazy Egg. He operated the Twitter and Facebook profiles back in 2017. During that period I was shown a different world of social media management that unveiled the true potential of what thoughtful social media practices can do for a brand.

I interviewed Tad a couple weeks ago (as you can see in the video above). This post isn’t a transcription of that video. Instead, I wanted to bring forth some of the key things that really stuck with me. The really good stuff. Since then, I’ve had time to reflect on our interview, so let me enlighten you!

The idea that you NEED to be doing social media if you’re an online marketer. On one hand, you want the business or brand to look alive on social media. If people see that your last Tweet or Facebook update was during September 2015, they may get the impression that you’re out of business.

I agree, that doesn’t look too great.

But to turn that fear into a habit where you’re auto-posting links to website content isn’t a good solution either. This is a key point that Tad hammers into the listeners’ brain during the interview.

Twitter’s algorithm detects how much your tweets engage with your audience. If your tweets are not getting likes, replies or retweets, then you’re going to reach less of your audience later on.

And if you think of it from Twitter’s perspective, it makes perfect sense.

Twitter is a business. Their business model requires that people stay on their platform as much as possible. If you tweet content that’s going to get hundreds of people commenting, liking, and retweeting, you’re doing their business a favor.

They are going to return the favor by having your tweets show up more often (or higher up) on other people’s feeds. Which means you get more engagement and reach for your brand.

So, keep this in mind the next time you’re about to post something to social media.

2. Which Means You Should Plan Your Social Media Marketing

Another problem I realized is that as individuals, we’ve been trained to think of social media as a platform for spontaneous outbursts, where it’s OK to be yourself and not put too much thought into anything you post. You’re supposed to be comfortable with your friends and followers – and not worry too much about what you post.

Doing social media for a brand is a completely different story. Everything you post needs to be cross-checked with the brand values and with some thought as to how it represents the company. It’s probably a better idea to plan every social media post carefully.

There’s no one-size fits all recipe for this. But if I were to take a stab at it, I might suggest:

3. What If You Don’t Have That Much Content To Campaign With?

Believe it or not, this is actually a good thing!

Why? Well, because unless you can repackage old content into something fresh that’s going to get a lot of engagement – you’ll quickly lose your audience’s attention. You want people to be excited to see your next update! That’s the name of the game in marketing.

So what do you do?

Simple, always be on the hunt for great articles and videos that provide immense value to your audience.

And it certainly helps to be the first on the scene to unearth these content treasures. If you just grab the latest article that has been recommended by Pocket, chances are it won’t be news to your audience.

🏤 Even now in the #socialmedia era, having your own website is still central to building an online presence. #OnlineMarketing pic.twitter.com/R1EBOdb0xA

This tweet certainly got some good engagement. Notice this image is not Larry’s – it’s from bettiblue.com. Good etiquette would have been to mention them 🙂 .

But there’s an even better move you can make in this situation: Form content alliances.

Chances are there’s a complimentary business that also produces great articles, videos, infographics, whatever. Reach out to their social media team and ask them to send you their best content in advance so you can help promote it. This type of networking has a reciprocal effect, and the more you do it, the more you’ll be in front of other audiences.

So many businesses completely ignore the comments and replies left by their audience. What a waste. This is that rare chance you get to interact with potential customers and followers online. Do it!

Now you may be saying Tesla doesn’t need any more PR or buzz. But no one from Tesla jumped into this super engaging Tweet. Do you know how many MORE people you could get excited about your brand if you just conversed with them?!?!

This is sometimes the real untapped treasure trove of B2B social media. It depends on your industry, but for a good deal of them, you can search for questions, join industry chats, find people complaining and/or simply offer help.

By answering questions and being a helpful resource, you’re doing your brand a huge favor by spreading goodwill. Your engagement rates will increase and most likely your follower count will too.

And you can always start your own chat 😉 . 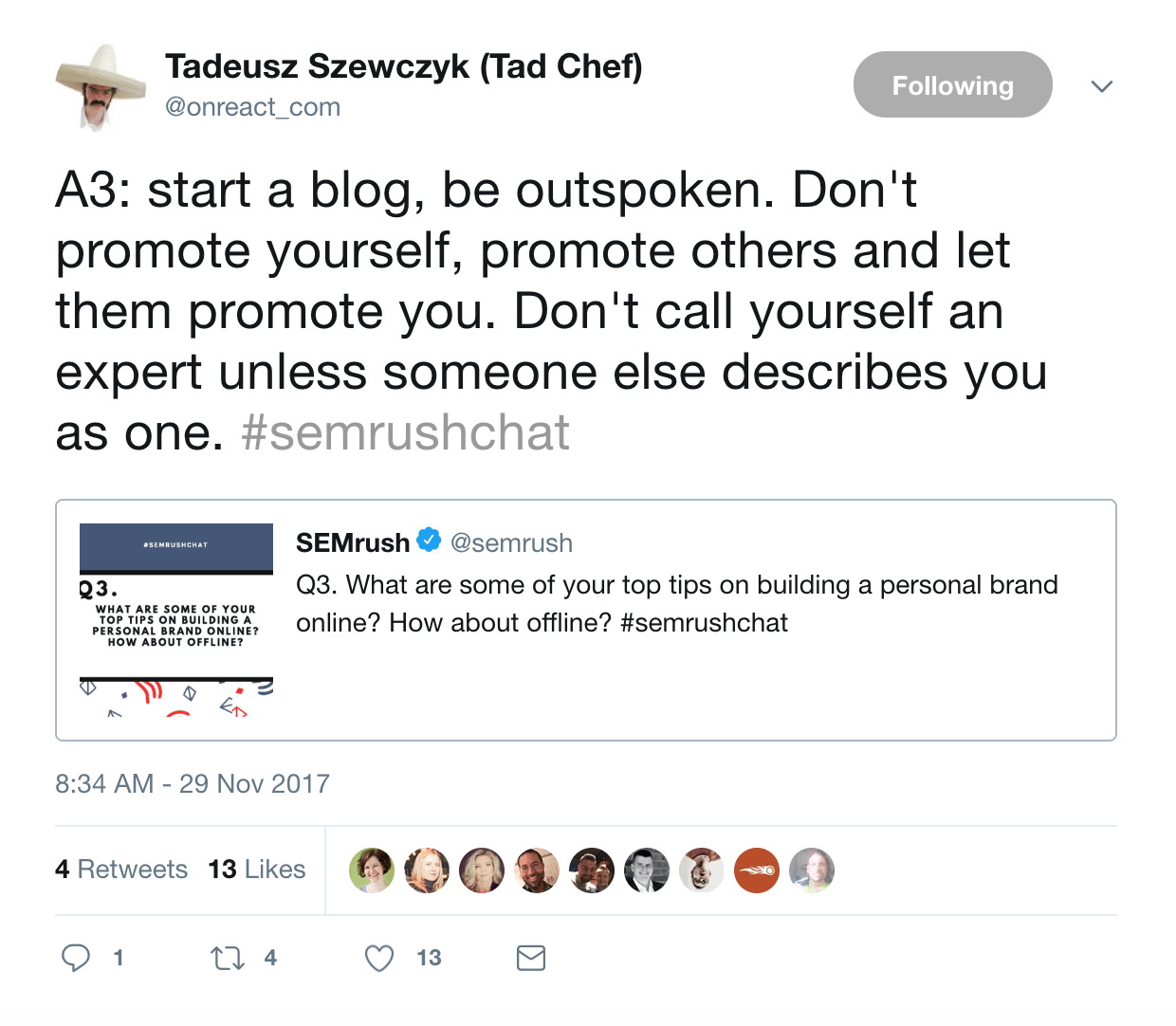 6. Understand The “Logo vs. a Real Face” Predicament

Generally, people don’t engage with brands (or a logo) as well as a real face on social media. Now, it’s possible to build up a brand account that eventually develops a personality and brand voice (which actually a great component to an awesome branding strategy).

Arby’s is an exception where the brand voice has taken on a life of its own. Of course, this is a B2C example, but it’s definitely worth studying.

But the point is to simply understand this social media nuance. People generally don’t expect a B2B company account to “sound” personal or human. This can be a great social media super power if you wield it correctly. Social media platforms provide your customers and prospects an extremely easy avenue to communicate with your company. Think about it: A person can message or tweet at a company and get an answer to a question within an hour or two, or wait a whole day or more for someone to respond to an email.

The trick is to let the world know you’re available to communicate and engage on social media. You do that by:

Finally, you should probably consider tweeting from a personal (business / professional) Twitter account as well. Especially if you’re the founder or CEO. This only boosts the overall social media power of your company and the fact that it will be coming from personal profiles (meaning, the founder and the rest of the team) will be even more effective.

Unless, of course, you’re terribly embarrassing in every kind of social situation 🙂 . In that case, hire a ghost social media marketer (psst hire Tad!).

When Tad started doing SEO 20 years ago, socializing online was all about being anonymous and using nicknames. Being on the internet back then, you just didn’t want people to know your name or where you lived. Additionally, Tad’s name was hard to say…so he shortened to his name to Tad Chef.

The idea behind the sombrero was that Tad wanted an avatar that would associate his white hat SEO services with the internet marketing world. A “White Hat” means someone that practices search engine approved SEO tactics and strategy. And with his new name being Tad Chef, naturally a chef hat came to mind. But instead he found a picture of a man that looked like him wearing a sombrero, so he went with it: 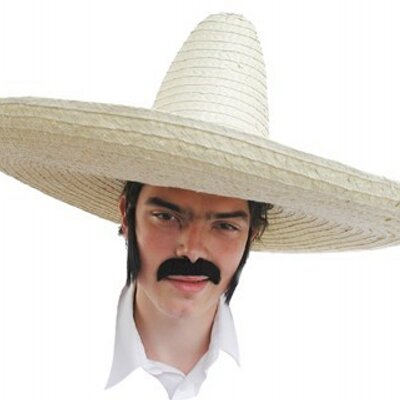 I think his choice was brilliant! Plus, to me, sombreros mean fun / fiesta / party – so who doesn’t want to work with a guy like that? 🙂

The avatar worked. People remember Tad because of it. Even Rand Fishkin remembers him because of his sombrero – which is always a good thing!